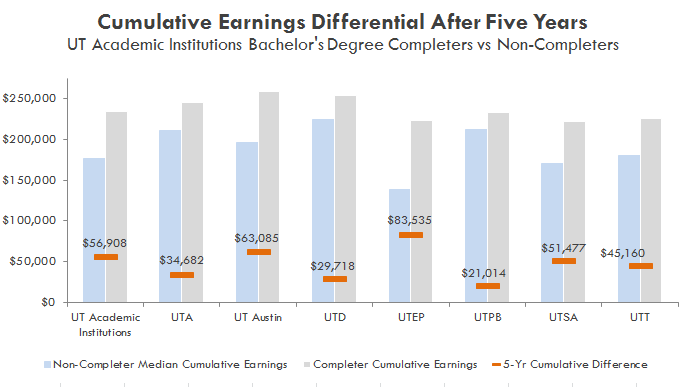 Note: The UT Brownsville and UT Pan American campuses closed at the end of AY 2015 and therefore are not displayed, however they are included in the overall UT Academic Institution calculations.
UT Rio Grande Valley began enrolling students in Fall 2015.

Completing a bachelor's degree pays off.

Students earning a bachelor’s degree from UT System academic institutions earn more than those who enrolled but did not complete their degree. Over their first five years of working in Texas after earning their bachelor’s degree, students graduating between 2007-08 and 2009-10 made approximately $57,000 more than those who did not complete their degree.

Postsecondary education is a large investment. Though the value of a college education reaches far beyond earnings, the financial commitment makes increased earnings an important outcome of receiving a degree.

On average, the bachelor’s degree recipients earned $11,000 more in their first year after graduating than those not completing their degree, a clear indication of return on investment just one year after graduation. Graduates had median earnings of $36,871 while those who did not complete their bachelor’s degree earned a median of $25,875 one year after leaving a UT System academic institution. When looking at five years after exiting, those earning their degrees had median earnings of $50,881 compared to $38,801 for those who did not complete. Over time, these earnings differentials accumulate. After just five years, the difference reaches approximately $57,000.

About the Data
This metric is based on undergraduate students who earned a bachelor’s degree from a UT System academic institution or left without completing their bachelor’s degree in academic years 2007-08, 2008-09, and 2009-10. The students who did not complete but were identified through the National Student Clearinghouse Student Tracker system to have enrolled in further education beyond their UT System enrollment were not included in the analysis. Earnings data reflect actual earnings reported to the Texas Workforce Commission. Earnings are based on a calendar year and are inflation adjusted to reflect 2015 dollars. Only those employed for a full-year (all four quarters in a calendar year) in Texas are included.

Other Related Data and Information
seekUT