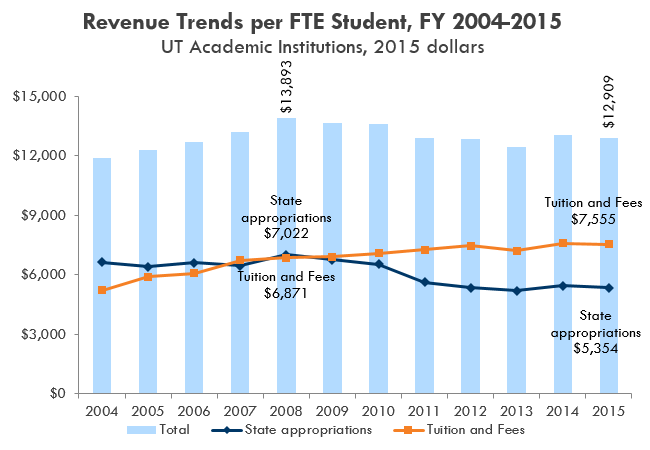 Diminishing state support is a challenge that is not unique to UT System or even Texas. The majority of states across the nation struggle with the same issues—maintaining affordability and quality while experiencing cuts in state funding. Despite these decreases in state funding, the UT System is dedicated to maintaining the affordability of its institutions. This is evidenced by the minimal increases in tuition and fees over the last several years. (1)

About the Data
Per student = per full-time equivalent (FTE) student.
Adjusted for inflation to FY 2015 dollars using the Consumer Price Index – Urban for September.

Tuition and fee revenue is net of scholarship and fellowship discounts and waivers. State Appropriations include general revenue support from the State of Texas for instruction and operations, infrastructure support, special items, tuition revenue bond debt service, and group health insurance and employee benefits. Totals do not include the University of Texas at Brownsville.