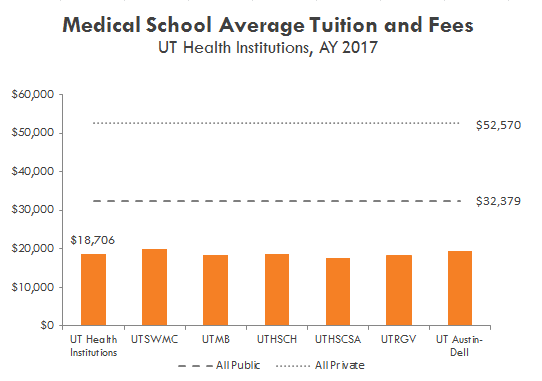 Medical Education at UT System Institutions Is a Great Value.

Graduate medical education is expensive—for institutions and for students. Medical school tuition and fees today are more than two-and-a-half times the cost of 20 years ago, according to the Association of American Medical Colleges (AAMC).

Lower tuition and fees remove some burden of debt from new doctors and may even encourage more students to consider going to medical school, which could be a key component to addressing the critical shortage of doctors in the state.(1)

About the Data
Data are from the Association of American Medical Colleges (AAMC) annual Tuition and Student Fees Survey. Data presented include tuition and fees for first-year medical students. Health insurance fees are not included. Indebtedness data is for 2015 graduates.

Other Related Data and Information
seekUT