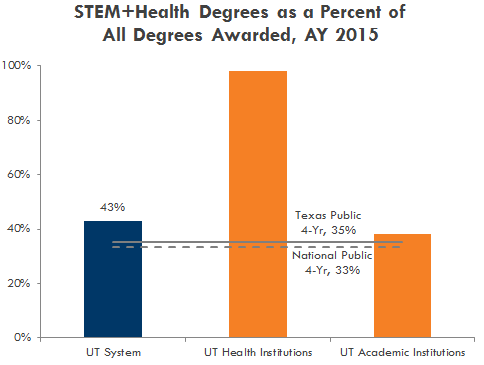 UT System is educating the workforce of the future.

The University of Texas System institutions awarded 46% of its degrees in STEM (Science, Technology, Engineering, and Math) and Health-related fields in academic year 2016, up from 36% in 2011. UT System's percentage of degrees awarded in STEM+Health is more than the average for public universities in Texas (37%) and for national public universities (35%).

All of the UT System Health Institutions and six of the eight Academic Institutions were at or higher than the 2016 national public university average for the percentage of degrees awarded in STEM and Health-related fields. (Note that the University of Texas Brownsville and UT Pan American campuses closed at the end of AY 2015. UT Rio Grande Valley began enrolling students in Fall 2015. Therefore, as of AY 2016, UT System has eight Academic Institutions).

Since 2011, UT System institutions have increased the percentage of degrees awarded in STEM+Health fields by approximately ten points, from 36% to over 46%. The state and national averages have also increased since 2011, though at a slower rate (approximately seven points).

From the National Academies:

The science and technology research community and the industries that rely on that research are critical to the quality of life in the United States. Only by continuing investment in advancing technology—through the education of our children, the development of the science and engineering workforce, and the provision of an environment conducive to the transformation of research results into practical applications—can the full innovative capacity of the United States be harnessed and the full promise of a high quality of life realized.(2)

From the National Science Foundation:

In the 21st century, scientific and technological innovations have become increasingly important as we face the benefits and challenges of both globalization and a knowledge-based economy. To succeed in this new information-based and highly technological society, students need to develop their capabilities in STEM to levels much beyond what was considered acceptable in the past.(3)

(2) "Why Are Science and Technology Critical to America's Prosperity in the 21st Century?" Rising Above the Gathering Storm: Energizing and Employing America for a Brighter Economic Future. Washington, DC: The National Academies Press, 2007.

This metric uses the National Science Foundation STEM classifications. Health-related fields are defined as all programs with a Classification of Instructional Program (CIP) code of 51 (Health Professions and Related Programs).