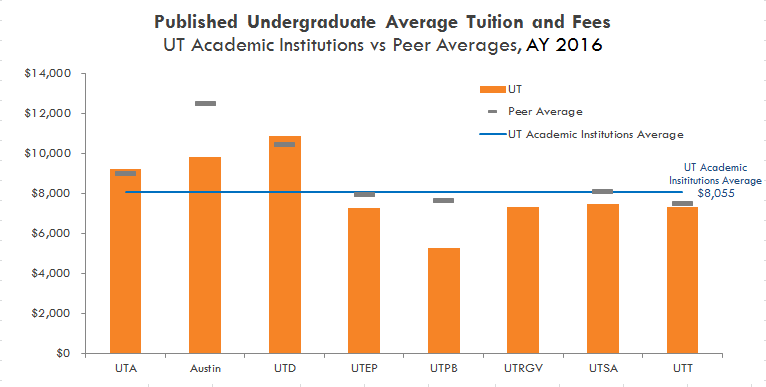 Note: The UT Brownsville and UT Pan American campuses closed at the end of AY 2015.
UT Rio Grande Valley began enrolling students in Fall 2015 and its peer institutions have not yet been established.

Related Resource
What Does This Metric Show?

Keeping college affordable is critical for maintaining access to Texas residents and to developing an educated workforce prepared for the future. UT System's mission statement makes its commitment to providing "superior, accessible, affordable instruction" clear.(1) Among 25 peer public university systems across the country, UT System academic institutions had the third lowest dollar increase in tuition and fees since AY 2012. Though minimizing increases in tuition and fees is crucial, it is also important that grant and scholarship aid keep pace with the rising cost of attendance to ensure access and affordability. In AY 2015, grant and scholarship aid to UT System undergraduates covered, on average, 39% of students’ full cost of attendance, compared to the national average of 36% for public four-year institutions in AY 2014. Despite its higher performance versus the national average, UT System’s AY 2015 levels reflect a decrease from its status in AY 2011 (43%). However, it is important to note that this could be due, at least in part, to the recommendation by the TEXAS Grant program that average award amounts be reduced beginning in AY 2012.

About the Data Tuition and Fee data are the average in-state tuition and fee amounts for the full academic year for full-time, first-time degree/certificate-seeking undergraduates as reported to the U.S. Department of Education's Integrated Postsecondary Education Data System (IPEDS). Peer comparisons are based on each UT institution's peers as determined by an extensive peer-setting process in 2012.